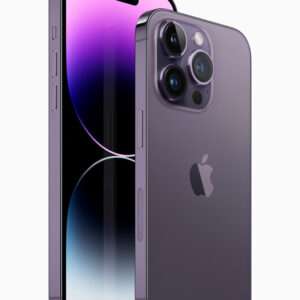 The overall rating is based on review by our experts

These are all the features and technical specifications of the iPhone 14 and iPhone 14 Pro Max , two models that break records both in specifications and in price, and these two phones are the most expensive that Apple has ever marketed. Let’s see what they hide.

Goodbye to the notch

The rumors dropped it, and it is confirmed. The iPhone 14 Pro and 14 Pro Max are the first iPhones since the iPhone X to say goodbye to the notch. They replace it with a somewhat less intrusive system, which includes Face ID. This is one of the key points in these iPhone 14 Pro and Pro Max , since it makes sense at a functional level.

This new system interacts with the system, unlike the traditional notch. Apple calls it Dynamic Island , acting as a kind of notification LED that changes its length depending on the content that is reaching us. It will not only work with native apps, but is also open to third-party apps , so any app can interact with the new island.

The rest of the design is similar to that seen in the last generation, stainless steel, matte glass on the back , and a huge camera module. There is little difference in this aspect with what is seen in the models of the previous generation.

The Always on Display comes to the iPhone

The screen repeats with 6.1 and 6.7 inches, full HD +, with an adaptive refresh rate of 120Hz. The maximum brightness rises to 2,000 nits, a very high figure. For the first time in iPhone history, Always On Display arrives . Unlike Android, it is not a black screen. It will be a dimming of the content displayed on the lock screen. We can configure the widgets that we want in

Of course, these new iPhones feature the new Apple A16 Bionic, a 4-nanometer processor. It promises to be 20% more efficient than the A15 bionic , as well as notably more powerful. This SoC is made up of a CPU with 6 cores, a new ISP and a GPU with 50% more bandwidth.

The best camera on an iPhone 14

The iPhone 14 Pro and Pro Max debut, for the first time, a 48-megapixel camera sensor with Pixel Binning. It’s 65% larger than last year’s, with OIS built into the sensor.

Betting on this combination of 4 pixels in 1 (to shoot at 12 megapixels), is something already seen in Android, although Apple promises to rely on its ISP to make more sense . They promise double the luminosity in all sensors (in low light conditions).

Apple seems to trust the sharpness of its iPhones, to the point that the new iPhone 14 Pro is capable of shooting 2X digitally and natively , without us having to manually zoom. If we want to go further, the telephoto lens is still a 3X.

ProRAW remains a feature exclusive to these iPhones. As expected, we can shoot in 48-megapixel mode . Cinematic mode can finally record in 4K.

Check Out Detailed 11 Pros and Cons of iPhone 14 Pro Max must read!

Signalpk.com is one of the most useful and informative website where you will get tech news, gadget info such as review and specification, price in pakistan, compare,

Signalpk. will send you the latest Gadgets launches, specifications, and prices.